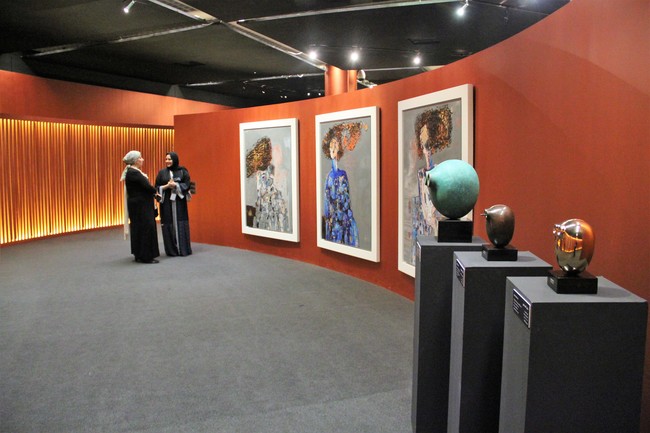 To watch the TV interview with the artist on these sculptures:
https://www.youtube.com/watch?v=uIqXn3QQwmo

The Blind Owl:
Each owl is made in an abstract form and simple geometric shapes such as circles and oval. The artist loves these shapes as he considers them “Lines of beauty” as it is called in the study of beauty ‘Aesthetics’.

He wanted to bring attention to the fact that owls are perceived unfairly in his society and culture where they always associate owls with bad luck, death and jinx. While in other societies and cultures owls are always linked to wisdom and knowledge. Educational institutions use the owl as an icon. The owl is always seen as a graduation bird.

He used bronze as a medium for this work with different patination colors. In the middle of the artwork or the middle of the composition, he placed mirrors finished stainless steel to convey the message that the owl reviews itself, has self-reflection and mirrors itself; fasting during the daylight and going to a remote area alone at night. This is characteristics of wise scholars.

He titled the artworks “The Blind Owl”. He used the word blind to show that owls don’t look at others, but they look inside themselves. He made four of them blind, but each in a different way. One of them had a steel pin in one of her eyes to show that they have a sharp and clear views of their society’s issues in spite of being blind. The second owl has an inward look and reflections. The third owl: the two eyes are completely blind and it’s a total inner reflection. As for the title, it was inspired by the famous novel, ‘Boof-e-Koor’ [The Blind Owl], written by Sadeqh Hedayat.