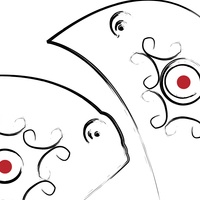 Andrea Benetti, born in Bologna in 1964, has been expressing his pictorial talents for many years to the favor of both critics and the general public of the complex world of contemporary art. His work has been shown in highly prestigious venues, and is on permanent display in at least about twenty museums, public institutions and international collections. In December 2006, Benetti wrote the Manifesto dell'Arte Neorupestre (Manifesto of Neo Cave Art) which was later presented at the 53rd Venice Biennial in the Nature and Dreams pavilion, in Ca' Foscari University. Under the auspices of the Biennial, a catalogue was specifically introduced for the event, edited by Umberto Allemandi. In 2009, Andrea Benetti published a limited edition collectible book (the copies were numbered and signed by the artist), entitled “An Unusual Exploration into Velocity”, that presents the artist's interpretation of the theme (twelve paintings on canvas) as well as innovative theses about velocity as it was seen by various civilizations throughout history, and the innate desire of man to dominate it. A dozen authoritative university professors joined the project, and supported Andrea Benetti's theses, by contributing essays to the book that outline their own view of velocity as it relates to their area of expertise. A few critical essays were penned by significant contemporary art experts. The volume has been acquisitioned internationally by museums, libraries, and other institutions. In July, 2010, the Bolognese painter was invited to exhibit his works at the 61st edition of the Michetti Award, the acclaimed international review of contemporary art that has been held every year since 1947 in the Michetti Museum. In November 2010, Andrea Benetti's Neo Cave Painting was shown at Palazzo Taverna (Rome), in the Legal Archives of Amedeo Modigliani, alongside the works of Giorgio De Chirico, Amedeo Modigliani, Andy Warhol, Keith Haring, Mario Schifano, Max Jacobs, Carlo Corsi, Jules Pascin, Guido Cadorin in a show called “Portraits d'artistes”, curated by the President of the Modigliani archives, professor Christian Parisot and professor Pierfrancesco Pensosi. the project was presented to the press and television by critic Vittorio Sgarbi. At the same time of the show in Rome, and within the United Nations' program "Academic impact", the representative of Italy, Istituto Europeo Pegaso, donated Andrea Benetti's piece,"Against violence" to the permanent collection of the United Nations Headquarters.
In May 2011, Benetti was invited by Salento University, School of Cultural Heritage to hold a seminar on Neo Cave Painting for the students of History of Contemporary Art presented by professor Massimo Guastella. In September 2011 Benetti's work was shown in the caves of Castellana, and the show was part of a program of research of contemporary art of the Cultural Heritage department of the University of Salento. On March 9th 2012, an important watermark in Andrea Benetti's career was reached with e acquisition of one of his works into the Collezione d'Arte del Quirinale (The Italian Executive's art collection). This brilliant achievement came about by request of President Giorgio Napolitano with the full support of professor Louis Godart, councillor for the conservation of cultural heritage of the Quirinale (executive government). The presentation in the Palazzo della Presidenza della Repubblica and specifically in professor Louis Godart's private offices lasted more than an hour while the professor praised Andrea Benetti's commitment and artistic abilities, proving to be a fine connoisseur of Neo Cave Art. A few months later, in May 2012, another of Benetti’s paintings was accepted into the collection of the Museion, the ultra-futuristic museum of Modern and Contemporary Art in Bolzano, Italy. In November of the same year, Benetti was invited by Roma Tre University, to hold a seminar on Neo Cave Painting for the students of Education Sciences. In the same month, another of his paintings was included in the collections of the Vatican. In March 2013 three further paintings were accepted in important collections: the MamBo Museum in Bologna, the Chamber of Deputies in Montecitorio Palace, and the Argentine Ministry of Justice and Human Rights in Buenos Aires. In March 2014, the University of Bari hosted an exposition and seminar on Neo-cave Painting, in the Aula Magna, presided by the institution's Dean, prof. Antonio Felice Uricchio. The following month the show was moved to the city of Ascoli Piceno, in Palazzo dei Capitani. The University of Bari and the Gallery of Contemporary Art of Ascoli Piceno purchased Andrea Benetti's artwork for their collections. In April 2015, the important institutional exhibition of Andrea Benetti at the Italian Chamber of Deputies, promoted by the University of Bologna, the University of Ferrara and the Ministry of Culture and curated by prof. Silvia Grandi and prof. Marco Peresani. In June and July 2015, the exhibition "Abstraction of the origins" curated by prof. Toti Carpentieri and promoted by the MUST, the Historical Museum of the City of Lecce, was inaugurated in the halls of the Castle of Charles V and a work became part of the Municipal Collection of the city of Lecce.

ANDREA BENETTI'S WORKS AROUND THE WORLD

Andrea Benetti, born in Bologna in 1964, has been expressing his pictorial talents for many years to the favor of both critics and the general public of the complex world of contemporary art. His work…
Watch