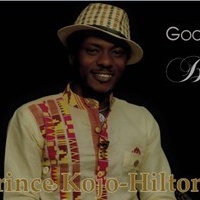 Prince  Kojo-Hilton  is  a  Production  Designer/  Art  Director,  an  Art  Advocate,   born  early  80’s  in  Ghana.  The  2016
Osagyefo Pan African Eminence Art Director Award Winner (among other awards and recognitions)  and the Greater
Accra Regional Chairman for Ghana Association of Visual Artists (GAVA)
He is a product of the National Film and Television Institute, NAFTI, with a major in Art Direction and Production
Design.
Due to his artistic ability, he had the rare  opportunity of enhancing his carrier with the Technical Department of the
National  Theatre  of  Ghana,  in  the  areas  of  Scenic  Design,  Props  Design,  Makeup  Effects,  Set  Design  and
Construction.
Kojo-Hilton  has  exhibited  his  talents  in  both  local  and  international  productions  as  an  Art  Director,  Production
designer, Set Designer, Graphic Artist, Scenic Painter, Makeup fx Artist, Story board Illustrator, Model making etc.
To  his  credit,  Kojo-Hilton  created  the  first  ever  man-made  Volcano  in  Africa  2012  for  The  Guinness  Big  Eruption
Concert in Accra. His works are best seen in Movies, TV commercials, Music Videos, Stage Events, and many more.
Adding to his prehensile repertoire - having worked as a Scenic Artist with Hollywood Directors of "Matrix" Lana and
Andy Wachowski on the Science Fiction Movie "Sense 8" - shot in Nairobi, Kenya.
Kojo-Hilton has worked with most of the renowned multi-media firms and film production houses in Ghana. They
always keep laud and recommend him because of his dedication, hard work and ingenuity.
Prince  Kojo-Hilton  is  an  Art  advocate,  for  the  past  15years  of  his  life;  has  single  handedly  Thought,  Trained,
Developed and Mentored over 65 young talents.
He received an Honorary Award from the University of Ghana  -Legon, School of  Performing Arts 2017, and also has
been nominated for the Global Art Award in the category of THE ULTIMATE BEST GLOBAL ARTIST AWARD, November
17,2017 in Dubai,
Kojo-Hilton is the founder of Support Arts Foundation, CEO of HILWOOD STUDIO and the Executive Director of THE
ARTS LEGENDARY HALL OF FAME event which started 2015.