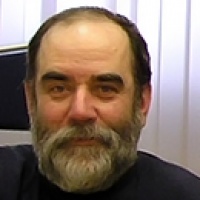 Yuri Yudaev-Racei
born on June, 15, 1956 in Kaliningrad / Konigsberg at the Baltic Sea