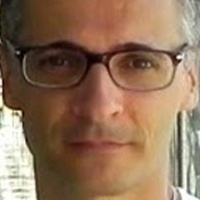 I was born in 1971 in Turin, where I live and work as an independent artist and as an architect, collaborating with several design offices.
In my artistic research I am mainly interested in the study of language. Every language is created with the purpose of communicating information. But each language also has formal rules stemming from the purpose for which it is used. Is it possible to isolate from one language only its formal rules, as if they were a decoration? And what happens if I apply that structure to another language? How its meaning will change? What will remain of the original meaning of the language?
When we consider a road map or a map of the territory we note that they contain different information that are represented by different means, according to the purpose for which they were created: each time we find colors, symbols and words that recall a precise meaning. What happens if I take these techniques of representation, these symbols, and take off the scope for which they were created and mingle them with each other? Will it be for the reader a text in a foreign language, that is meaningless, or through the world of associations and references that each of us possesses, will generate a new language?
In another example, a bar code is nothing but the representation of a series of numbers through lines of different thickness. Is it possible to extrapolate from that language his formal structure in order to develop a new language? This new language will be able to generate new meanings? To do this you can work on formal rules, studying possible changes and developments, increasingly moving away from the point of departure.
In my drawings I try to apply this process of work. The subjects of my study are the cartographic representation, the figures in the manuals of medicine, the sheets of the herbals with their rules for the classification of the plants, the ancient manuals that collect all the known form of real and imaginary animals, the facial expressions and physiognomy, the pornography, the structure of flags, and so on. All these are languages owning their own lexicon; my trial is to isolate and reinvent that lexicon.
In the oil paintings something different happens. I usually paint on canvas when I need to tell a story. Often this story takes origin form something that is related to my personal experience, or from my real life, something I’ve read, someone i’ve known. This is why the most part of my canvases aren’t part of a series but are isolated narrations.
My preferred techniques are classic oils on canvas paintings, and pencil drawings that I paint afterwards with oil colors. In both cases the work proceeds always sedimenting several layers one on the other.

I was born in 1971 in Turin, where I live and work as an independent artist and as an architect, collaborating with several design offices. In my artistic research I am mainly interested in the study …
Watch