DrayeArt wrote:Most of the games now, are shooters or fight games. Strategy games(mainly money) are extinct. I enjoyed building up those fantasy empires of wealth. The shoot/fight games actually bother my eyes and give me motion sickness. When I play Madden, it's usually in Manager mode so I can out-greed my opponent.

Another one I used to play, that was pretty trick was Parasite Eve. Now that thing was addictive.


Haven't heard of that one. When I was a kid I got to test a (seriously ghetto) 3D game for the Genesis, back when they were trying out gloves and goggles...all that. My dad tested with me and had to stop within 5 minutes, totally sick. Maybe it's generational...I love a 3D shooter. Fun fun. Used to play Rise of the Triad, Wolfenstein and Doom of course. I'll be an old fart who still plays these twentieth century games, but whatever comes out in thirty of forty years will probably make me sick.

Parasite Eve was a hunt and shoot ghoul game like ResEvil or Silent Hill. The first Eve had pretty cool graphics and a finale in the Chrysler building that you could stretch out for days. 99 floors of monsters and hidden weapons. PEII had beautiful graphics(for it's time) but was way too easy. It had a real easy weapon, less than halfway thru the game, that could destroy anything. After that, it was just a series of numerical puzzles. Like the katana in Silent Hill. Once you get it, what's the point of playing further? 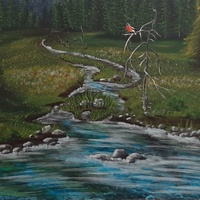 Omg, sims2! The best part of that game for me is building and decorating the house, after that is making clothes and make up, skin tones and all that and the third is making a sim...
I done a bounch of custom stuff for them.

But my 'love' is Sim City. I did some diarys at Simtropolis...
Karin Pavlic

I've made a few recolors of outfits for my Sims, but I've never bothered to learn how to make custome content. I download stuff from ModTheSims2.com, and the people who upload things there do a lot better than I ever could

I've even downloaded a Seymour Sim from that site!
Top

Yea, modthesim is good site for customs, and few others.

I dl-ed the nude patch.

Me too! I'm a pervert

Me three. Somehow not as titillating as it could have been.
Support FM | Free art websites using your FM gallery
Top

Btw. I heard that some jurnalist or somebody went all 'drama-queen' claiming that Sims2 in its original shape (without patches and such) is a promotion of pornography AND pedofily (becous of the feture of bathing a baybe).

Lol, that's so stupid.Even when you take away the censor blur, they look like barbie dolls. Although, can can download skins with nipples lol.
Top
Post Reply
34 posts