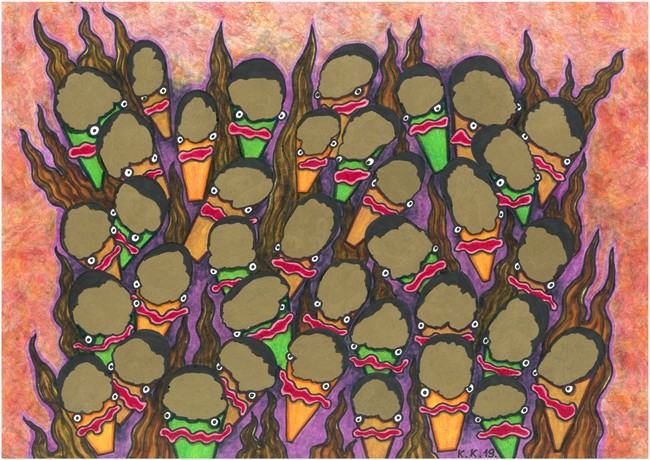 Unique opportunity! First time in Fantaz City - Golden Brains! The greatest genius, scientists and philosophers will be held a series of lectures where you have the opportunity to get new insights! The beings with the Golden Brain will unselfishly share their knowledge on this 29th of this month, in the Grand Hall of Fantaz City! - invited the inhabitants of the World of Fantasy advertised in all media.
When I entered the Great Hall, she was full of people as pomegranate seeds. Anyone who considered himself a person who wants to know more and so grow as a personality, he was there. When they came out on the stage behind the booth, it was immediately evident that they did not belong to our world, but to another, theirs. Their lecture was difficult to understand, sentences long, full of foreign words and phrases, they emphasized the point of their presentation using expert terms. Already after the second speaker's my pleasure to listen Golden brains began to decline, I did not understand what they wanted to say. Is left just by the end of the lecture watch them as with great enthusiasm they bring their knowledge to those who do not understand. In the end, there was the applause of those who emphasized themselves as intellectuals of the Fantaz City, as well as those who are with applause wanted to point out that they understood the wisdom of the Golden Brains. The rest of us, sadly moving toward the ordinary world, I heard bakery Horacio how does it mumble:
- I doubt that after lessons I have more knowledge and that tomorrow bakes better bread. I know for sure that I paid the ticket very expensive, so from that fact I have to extract new knowledge.